Posted on November 21, 2018 by dracutrotaryclub 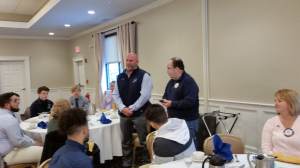 In a tradition dating back more than 40 years, Dracut Rotary hosted the senior players on the Dracut Middies Football team at their meeting on the Tuesday before Thanksgiving . The senior team members were the club’s guests at their regular meeting to wish them well in their Thanksgiving eve game against Methuen.

The players got a chance to experience Rotary and the club got a chance to congratulate Head Coach Jason Rivers on being named the New England Patriots High School Coach of the Week on October 30, 2018, marking the Middies first playoff win since 2008.