Posted on March 10, 2017 by dracutrotaryclub

Dracut Rotary Club’s 1st Annual Dining Around Dracut exceeded all the Club’s expectations. More than 400 patrons attended the March 6th event held at Lenzi’s in Dracut. Despite the cold temperature, the hall was packed with area residents anxious to sample the delicious fare being offered by 28 area restaurants and caterers. “We were thrilled with the response from area businesses and the crowd was amazing,” said Dining Around Dracut chair Lee Ouellette.

Patrons were treated to samples of some of their best dishes before choosing their favorites. 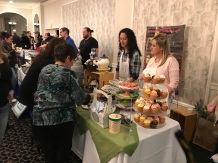 Dozens went home with raffle prizes as well, all donated by participating businesses, friends and supporters of Dracut Rotary Club. The response of those present was overwhelmingly positive, with most everyone saying they would be back next year. As for the restaurants and caterers, they want to be included in the 2018 event.

Dracut Rotary Club is looking forward to holding the event annually, according to Club President Renee Plummer. Proceeds from the fundraiser will support the Club’s many charities.