Posted on April 30, 2013 by dracutrotaryclub

It started with a need for mobility devices for “Crutches4Africa”, an International Project with Rotary Clubs working together worldwide. The call was heard by the Rotary Club of Dracut at the International Convention held in New Orleans. In September 2011, at Dracut’s Old Home Day, Rotarians began collecting crutches, canes, walkers and wheelchairs. The word was spread throughout District 7910 at weekly club meetings, the PR Dinner and the District Conference. During the year, collections were held by other area clubs, inside and outside the district, and at Rotary events, including, PETs and RYLA. 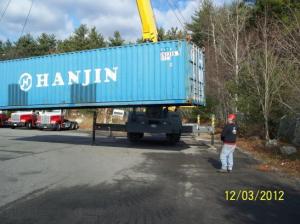 The container is sealed in Dracut.

As 2011 turned into 2012, the once empty shipping container continued to be filled with mobility devices. Since Dracut was the collection site for other areas, devices arrived by the truckload from other district collections including Maine, Massachusetts, Pennsylvania and upstate New York. A few of these deliveries were made by C4A’s founder himself, Dave Talbot.

In December of 2012, the container was filled to capacity and the doors were sealed. The container, packed with some 1900 pairs of crutches, 400 canes, 800 walkers and 40 wheelchairs, was rigged and loaded onto a truck for shipment.

It was loaded onto a ship and arrived safely at Benedictine Eye Hospital in Tororo, Uganda in early February 2013. From there, the devices were handed out to those in desperate need of help to move through their daily lives. 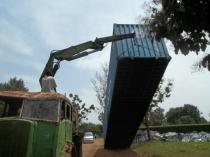 The container is unloaded in Uganda.

On behalf of “Crutches4Africa”, the Rotary Club of Dracut would like to thank the individuals and clubs who participated with their donations and collection efforts in bringing this project to fruition. The satisfaction of being able to see this project through was heartfelt and very rewarding. What happens now? We do it all over again!!

For more information, visit http://www.Crutches4Africa.org. To see how your club can help, by collecting and contributing to the next container of mobility devices, contact: cmoran@crutches4africa.org.